A KOTOBUKIYA Japanese import!  Kotobukiya’s next ARTFX+ Statue lineup takes a huge leap from the pages of DC Comics to the big screen and the upcoming Justice League movie.  Kicking off the new collection capturing these iconic heroes in their unique looks and costumes from the film is none other than the Dark Knight, BATMAN!  After witnessing the brutal murder of his parents, young Bruce Wayne was forever scarred and turned his angst and enormous fortune toward training and outfitting himself as Gotham City’s premiere vigilante.  Now the Caped Crusader and Justice League founder comes to the 1/10th ARTFX+ scale with a superior sculpt featuring the likeness of actor Ben Affleck!

Joining his fellow Leaguers in their impressive lineup Batman stands at the ready, planning for every eventuality as the heroes take on Steppenwolf and his Parademons.  Bruce Wayne looks like he stepped right off the screen with a highly accurate costume and lifelike facial sculpt.  His armored Batsuit features intricate texturing along with details like the multiple pouches on his utility belt, wicked bladed gauntlets, long flowing cape, reinforced boots and more.  With craftsmanship that only Kotobukiya can provide Batman looks dark and mysterious with his black and gray costume broken up by the black bat logo and bronze belt.  Sculpted by M.I.C., Batman stands over 7 ½ inches tall (in the ARTFX+ 1/10th scale).  Like the other Justice League members Wayne has magnets in his feet for perfect stability on his included base, and he’ll look great displayed on your shelf by himself or alongside his teammates Wonder Woman, the Flash, Cyborg, and the rest! 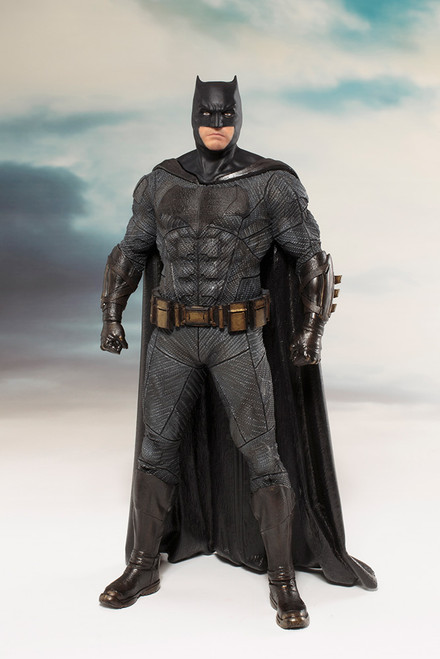