Coming up next in the DC Comics Bishoujo Collection (combining DC’s superheroines and villains with traditional Japanese stylings) is the fiercely independent vigilante and member of the “Bat Family,” HUNTRESS!

A refugee from Earth 2 like her friend and sometimes partner Power Girl, Huntress’ complicated history was recently re-organized in the New 52. She is Helena Wayne, daughter of Bruce Wayne and the Robin of her world. After ending up on Earth 1, where there was already a Robin, she took a somewhat more intimidating name and style. No longer tied specifically to Gotham City, Huntress travels the world righting wrongs according to her own code of honor. Helena’s alter ego is now presented in the Bishoujo style based on an original illustration by famed Japanese artist Shunya Yamashita. As sexy as she is dangerous, Huntress perches on a rooftop decoration to survey the busy city below her. With one leg raised up Helena leans forward slightly, holding her trusty staff with both hands. The martial artist’s sleek black and purple costume leaves little to the imagination, further enhancing her sexiness. While much of her body is exposed, Huntress’ outfit has incredible sculpted details like the pattern on her boots, the pouches and compartments on her belt, and her great cape billowing in the wind. Of course, no Bishoujo statue would be complete without a beautifully expressive face and equally dynamic flowing hair.

Standing 9 ½ inches tall (1/7 scale) on an exclusive base with a decorative griffin under her foot, Huntress was sculpted by Masahiro Takashi (GILL GILL). Display the sexy vigilante by herself or alongside her friend Power Girl or Batgirl with her similar base design! 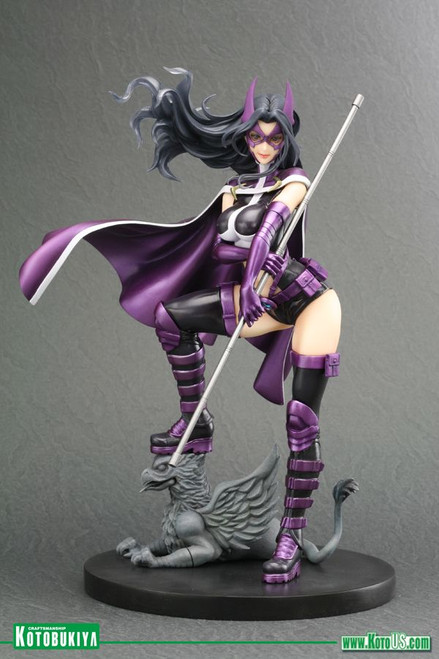