A KOTOBUKIYAJapanese import!  Coming up next in the DC Comics Bishoujo Collection (combining DC’s superheroines and villains with traditional Japanese stylings) is a brand new version of the Amazonian princess and member of DC’s “Trinity,” ARMORED WONDER WOMAN!  Since her comic book debut in 1941, Princess Diana has been an icon of female power, intelligence, and grace.  Arriving in “man’s world” from the Amazonian island home of Themyscira, Diana donned a red, white and blue costume to protect the world as Wonder Woman!  The timeless character returns to the Japanese Bishoujo (pretty girl) style in a new armored look inspired by Japan’s renowned illustrator Shunya Yamashita.

Wonder Woman explodes into action like never before in this dynamic statue that truly combines the character’s beauty with her tough spirit.  The Amazonian is frozen in action, leaning back on one foot while simultaneously deflecting attacks with her magical bracelets!  Ever the confident warrior, Diana doesn’t flinch under the unseen barrage but keeps her wits about her with a stoic expression on her Bishoujo-style face.  Wonder Woman is clad in a reinforced version of her iconic outfit complete with metallic red and gold top decorated with an eagle, large gold belt, star-spangled blue and white skirt, knee-high red, white, and gold boots, and a matching red cape with gold edges.  Of course, no depiction of the warrior woman would be complete without her silver bracelets, the magical lasso at her waist, and the tiara on her forehead!  You can even display Wonder Woman in two ways: defending herself as usual with her fists clenched or holding a dagger so she can go on the offensive.

Constructed of high-quality pvc plastic and standing nearly 9 ½ inches tall (in the ultimate 1/7 scale) on her exclusive display base, Wonder Woman was sculpted by Cigua.  Display the warrior princess on her own or together with other DC Bishoujo statues like Supergirl, Batgirl, or the Huntress! 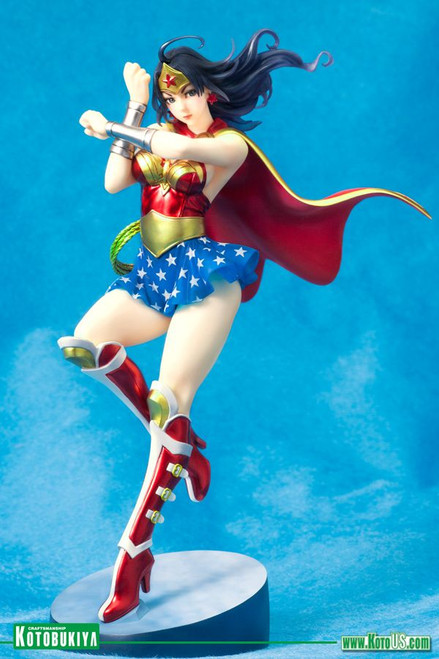